← back to
ears&eyes Records
Get fresh music recommendations delivered to your inbox every Friday. 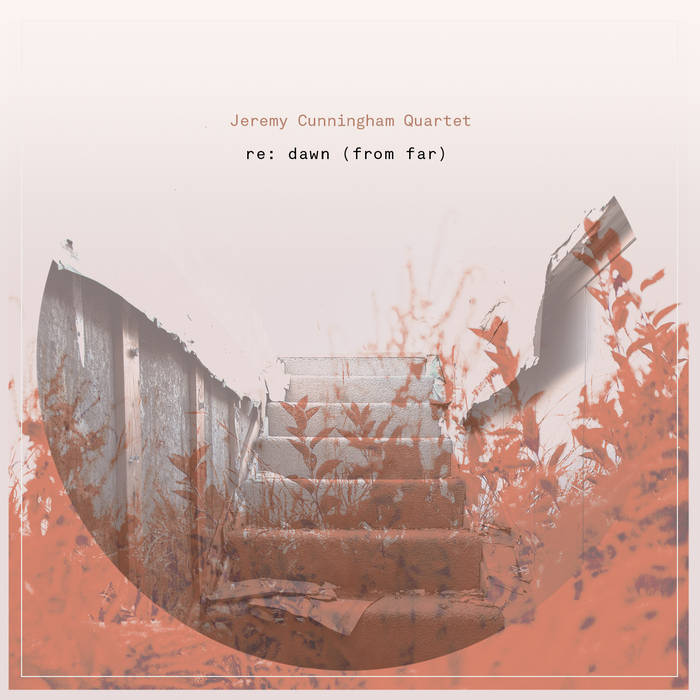 A Man Lost In Time

Drummer Jeremy Cunningham has been a staple on the Chicago jazz scene since moving to the city in 2009—he’s played with everyone from Von Freeman to Caroline Davis, and is getting his Masters in Jazz Performance at DePaul—but one thing was always missing: an album under his own name. But that was then. This is now: re: dawn (from far) will be released on June 17 from ears&eyesRecords.

re: dawn (from far) is Cunningham’s solution to what he used to see as a “missed opportunity” to record something tangible with his closest colleagues and mentors. On the highly collaborative album, he’s joined by guitarist Jeff Parker (Tortoise), Josh Johnson (a 2012 Thelonious Monk Institute fellow), and Matt Ulery (Loom). Years ago, Cunningham and Johnson played a number of times with the renowned Parker, a mentor figure to both of them. The seed of the album was planted when, at one gig, Parker mentioned offhandedly that they should all consider making a record. “We were too scared to take him seriously,” Cunningham laughs, and before long, both Johnson and Parker had moved to Los Angeles. Initially, Cunningham saw this as a wasted chance; soon enough, though, he decided to call them back and make it happen.

There was another, more personal reason that Cunningham felt ready to record his first album, after being featured on the albums of so many of his contemporaries. Back in 2009, Cunningham and his family were stunned by the unexpected death of his brother in their hometown of Cincinnati. “This record is a statement that I’m moving forward,” says Cunningham. “I’m trying to push on with the artistic process, toward the end of creating something that I’m proud of.” As such, re: dawn (from far) is both an poignant homage to the past and an exuberant nod toward the future. Even the title is a tribute: the first six letters are an anagram of his brother’s name, Andrew.

Cunningham says that the song-writing process was highly collaborative; he himself co-wrote songs with multiple musicians, including Doug McDiarmid of the indie rock band Why?, and the three other members all contributed their own original compositions. The resulting tracks feel nuanced and personal, “informed by the quartet's collective musical experiences,” according to Cunningham, and, as always, deeply indebted to the rich creative tradition of Chicago jazz.

The album’s first single, “Bembé”—a reference to a style of folkloric drumming that appears in the religious ceremonies of Santeria—can be seen as something like a drummer’s homage to both his craft and his scene. Cunningham spent hours listening to the Afro-Cuban grooves of these bembé folk recordings, and wrote the track with multi-instrumentalist McDiarmid. The drumming here is both sensitive and infectious: leading the band, but never overshadowing it, and eventually making way for a fiery guitar solo by Parker.

“Leaves Rain,” another standout track, is song both conceived in and written for the autumn. Years ago, Cunningham heard Josh Johnson and Dustin Laurenzi (Snaarj, TWIN TALK) utilizing a medieval technique called “hocket,” where a single melody is shared between two voices that alternate between resting and taking up the tune. Cunningham loved the technique and wanted to replicate it on a song of his own, so he and Laurenzi spent a fall afternoon making soup and composing together. In the middle of the track, Parker creates a gorgeous drone that stretches out, ethereal and quintessentially autumnal, into what feels like a sleepy fall afternoon, before Johnson and Laurenzi begin their medieval-inspired soloing.

Since each musician had already crafted a strong, individual presence on their respective scenes before coming together for re: dawn (from far), this was never going to be the sort of album wherein young musicians struggle toward a new collective sound. Rather, each player brought his own significant compositional experience to the table: Parker from his influential indie band Tortoise and well-recognized work in a variety of mediums, from pop to rock to angular jazz; Johnson, emerging from the Monk Institute to become a remarkable saxophonist and composer in his own right, having shared the stage with icons from Herbie Hancock to Aretha Franklin; Ulery, one of Chicago’s first-call bassists, as a composer and bandleader known for his sweeping lyricism, unconventional phrases, Balkan influences, and more. Props to Cunningham for combining them into something alchemical. “Jeremy is one of the most in-demand drummers in Chicago, and he put together a special band of unique voices and personalities for re: dawn (from far),” says Ulery. “His openness as a leader really brings out the singularity in each musician's voice for this project.”

There’s a warmth and a close-knit sound to the album that makes sense when Cunningham talks about his collaborative relationships with each musician. After all, improvisation only works well if your fellow musicians have your back. “Jeff Parker has always inspired me to create my own unique sound,” says Cunningham. “The ideas that he plays are so natural that it helps to make everything I play much more natural and thoughtful in general. He always knows how to change texture at the right moment, how to play something that’s really supportive. Matt Ulery is always checking in with me to make sure that we’re a unit, that we’re shaping things together. He’s always thinking of the long game. And Josh Johnson? We have a natural dialogue that’s been in place from the first time we ever played together. Josh is extremely melodic, and he’ll take an idea and start turning it around in different ways, taking it through many different variations during the course of the tune.”

Last fall, Cunningham took the album on the road through the Midwest and up into Canada. The music was well-received by excited audiences, with a radio interview in Montreal and a review in Detroit. One consistent comment was that the tunes were “beautiful and sincere.” That’s what happens when a group of talented musicians play well offstage, too.

“Even though his playing style does justice to traditional jazz techniques, some of the fills he created as the song went on had a thunderous energy that clearly showed that he had a fair amount of experience in playing genres of rock music as well… great precision and intensity...” - Luigi Murri, WXOU Detroit

Jeremy Cunningham is a drummer, composer, and improviser living in Chicago, Illinois.

Bandcamp Daily  your guide to the world of Bandcamp

Bonobo stops by to talk about his new record Fragments